They're still bigger than Hollywood, and they're set to break last year's impressive sales record. Video games increasingly appear on everyone's holiday gift lists. From kids to adults, portable to home console, there are many options for every type of gamer. Your decision on which system to buy should hinge purely on this question: "Does it have great games that are extremely fun to play?" No matter which system you choose this year, the answer is a resounding "yes."

The Mums craft new sound in absence of founding member

The genealogy of Lawrence jazz quartet The Mums follows a twisted path not unlike the capricious nature of a John Coltrane performance. Originally a trio organized by jazz drummer Don Mumford, a veteran player whose resume included a stint with the Sun Ra Arkestra, the band took on a life of its own after Mumford skipped town this past spring, three days prior to a big gig at the Coleman Hawkins Neighborhood Festival in Topeka.

Fronting a Led Zeppelin cover band requires three very important skills: talent, motivation and absolutely no fear of completely embarrassing yourself. As Brodie Rush can testify, the third skill may be the most important.

Viewers won't get too attached to 'Stuck On You'

A Farrelly brothers movie with a PG-13 rating should be a red flag to audiences. The filmmaking team of Bobby and Peter Farrelly epitomized the gross-out humor of the past decade with standouts such as "There's Something About Mary," which ushered in a new critical and commercial appreciation for the cinematically vulgar.

Nancy Ness opened the Carmesi Gallery in 1999. She carried artwork by area artists and funneled all her resources into the downtown Lawrence business. Despite her best efforts, the gallery folded two years later. Sept. 11 knocked part of the wind out of the venture. But Ness says art auctions -- yes, art auctions -- were the biggest barrier to sending customers home with original artwork. 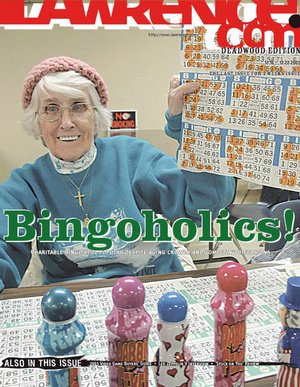