Two and a half years ago, James Spooner found his purpose. As an African-American punk who spent half his life feeling alienated in a white-dominated scene, Spooner decided to make a movie chronicling the experiences of black punks. With no formal (or informal) training, Spooner began a journey that would take him on a cross-country tour and introduce him to more than 80 influential black punks.

Town gets dose of 'shotgun journalism'

Mike Caddell, publisher of the Fightin' Cock Flyer, is a self-described hell-raiser - a practitioner, he says, of "shotgun journalism." Put another way: He makes people angry.

Red Balloon To Do

If you've ever been to a First Friday event in Kansas City, you know the Crossroads Arts District overflows with art enthusiasts. People spill out the doors of art galleries large and small -- none able to accommodate the influx of bodies clamoring to see new art (and consume wine, beer and cheese, of course).

There's a famous 1939 map that shows the United States from a New Yorker's perspective. New York state looms disproportionately large, and everything else kind of runs together. Evelyn Bucknow, the protagonist in Kansas University alumna Laura Moriarty's debut novel, takes the same egocentric view of her life in fictional Kerrville, Kan.

'Underworld' needs to lighten up

The premise is simple enough: Vampires battle werewolves in a modern-day setting. Yet the result is a disarmingly complicated story that grows weirder as it progresses. "Underworld" is neither scary nor particularly exciting -- somewhat of a drawback for a monster movie -- but there's something absorbing about a tale so steeped in its own universe that the rest of the world barely seems to exist.

thought I would let you know I made it to lawrence KS. lol 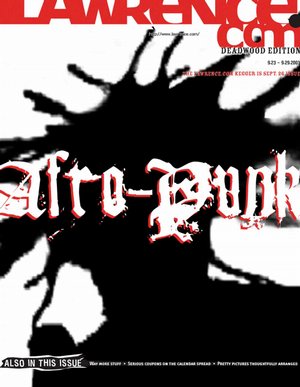