Fudge and loathing in L.A.

Whether you know who Travis Millard is or not, you've probably seen his artwork around Lawrence. Maybe you've leered drunkenly at the goat boy while unloading a couple PBRs in the bathroom of the Eight Street Tap Room. Perhaps you've gasped for air while puking on the hard concrete in the Replay Lounge's beer garden and found solace in a mural depicting a dead cat flying through heaven. Or perhaps you sometimes fondly reflect upon one of the hundreds of other traces signed 'tm2' that Millard left in the alleys and backstreets of town.

Lied Center officials decided years ago that if they wanted to keep performers on their stage, they'd have to invest in the creation of new art. They're anticipating an exciting return on one of their investments when Hubbard Street Dance Chicago comes to town Saturday as part of the venue's New Directions Series.

Santo Gold can definitely rock a house party, but can they translate the experience to a recording?

Before the Internet helped facilitate the idea of granting everyday people a widely available soapbox to vent their frustrations, Harvey Pekar was quite a novelty. The scraggly haired, hoarse-voiced, divorced loner worked a mundane job as a file clerk at the Veterans Affairs hospital in Cleveland. With an intense gaze that actually proved more observational than hostile, Pekar achieved a certain Zen mastery of cynical wallowing.

In past months Lynn Jenkins has been behind her opponent Nancy Boyda in the running for the 2nd Congressional District. Earlier this morning (October 13, 2008) Republican Kansas Treasurer Lynn Jenkins announced that she has raised $640,000 since the beginning of August in fundraiser money.

:) Please get out and vote.

The first in a new series about downtown vacant lots. 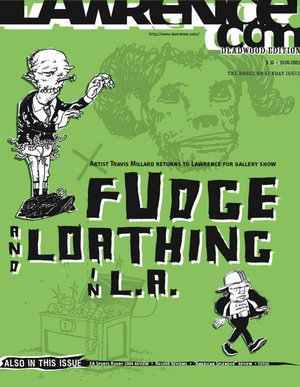