Artist Eric Drooker's passionate renderings have been seen everywhere from the covers of The New Yorker and The Village Voice to the brick walls and lampposts of South America; from the New York Times Op Ed page to finer comic book stores. He's collaborated with Allen Ginsberg and Rage Against the Machine. And whether it's with a harmonica, a booming bass drum, or graphic depictions of class struggle, he's getting a message to the people: discontentment, tempered with optimism. lawrence.com spoke with Eric about creativity, responsibility, and his upcoming week in Lawrence.

The baseball world looks to guru Bill James for answers. That means looking to Lawrence, Kansas. And he wouldn't have it any other way.

Suzan-Lori Parks digs up a winner in "Getting Mother's Body"

Few Battle of the Bands field as diverse and talented a crop of talent as the annual Farmer's Ball, the three-day show put on by KJHK 90.7FM.

The night after screening "Kill Bill Vol. 2," I happened upon a 1970s film called "Switchblade Sisters" on cable. It was a low-budget gang tale about female juveniles that featured a malicious blonde who sported an eye patch decorated with a butterfly.

It just might make you cry. Wait...is that a good or bad thing?

It is truly one of those shooters that has that inexplicable magic that you have no choice but to play.

If you went to Winfield's Walnut Valley Festival last October, you may have stumbled across three straw-hatted gentleman caterwauling with a harmophone, upright bass and guitar. Those men Jeff Stolz, Wallace Cochran and Chris Kuhlman compose Drakkar Sauna, one of Lawrence's most outlandish new bands.

Saving the World, One Dollar at a Time

In the words of Superchic[k], "they said don't try to change the world, you're just a girl."

Everyone needs to know how it feels to catch a cow. 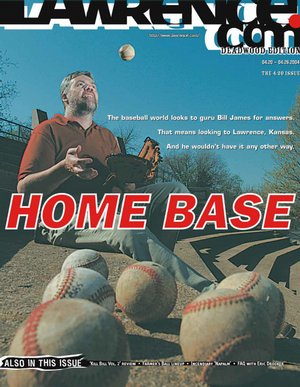