Review: 'Don't Let the Fire Go Out!' only lukewarm

Former Missouri Gov. Mel Carnahan made international headlines when he was elected to the U.S. Senate after his death in a plane crash just days before the 2000 election. His wife, Jean Carnahan, campaigned in her husband's stead and served in Washington for 2 years, becoming the first female senator from Missouri. Now, four years after tragedy struck her family, Carnahan has published her memoirs. The book's title "Don't Let the Fire Go Out!" was Jean Carnahan's campaign slogan and mantra after her husband died.

Slip Not :: Cleveland's Mushroomhead grinds its way to Lawrence

It takes a discerning ear to unfurl the petals of the rose that is modern metal -- while Slipknot may excel in simple batshit mayhem, the strength of Mushroomhead may lie in their Faith No More-inspired operatic layering. But who's to say. If you get right down to it, isn't there room for two eight to nine-member bands wearing terrifying masks and uniforms? As long as they're not Insane Clown Posse, is there really any harm being done?

Mayday Movers :: Activists and artists team up for a night of socially conscious revelry

When America wakes up May 1, most people won't be going to work. This year, Mayday -- a day historically tied to working-class resistance towards unfair labor practices -- falls on a Saturday, meaning that all of us working-class minions can celebrate our liberation from our bourgeois oppressors by getting loaded in the parking lot of Kauffman Stadium and gorging ourselves on dollar dogs. Or if that doesn't quite grease your skillet, a group of local movers and shakers has another idea: a fashion show, followed by an art show, followed by a dance party. Though all of the aforementioned activities occur frequently along the flanks of Mass. Street, these particular happenings are united by a common thread: politics.

Masani Azura doesn't want to hear about how hard it is to get a good belly dancing gig in this town. She's been trying for years. "A lot people think it's stripping," said Azura, a teacher and performer of the dance form. "If one person is offended by it, that's all it takes."

Robert Altman lowers the barre with 'The Company'

The very qualities that make Robert Altman great are also what make him such a frustrating filmmaker. In "The Company," a backstage look at the Joffrey Ballet of Chicago, Altman once again proves that he is one of the few directors with an instantly recognizable style.

Tired mothers find that spanking takes less time than reasoning and penetrates sooner to the seat of the memory. -Will Durant

I'm off to have a "schmammock" shake from McDonalds. Mmmm, mmm.

I'll Be Home for Christmas

You know, but only 'cause you feed me. 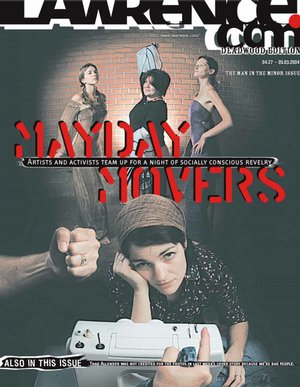