A lot about Sebadoh seems accidental. The band's very existence began as a side project for Lou Barlow, who was trying to cope with playing bass in the less-than-democratic environment of the band Dinosaur Jr.

From hip-hop to rock, Nezbeat collaborates with the prairie's pride on debut solo album

"The premise, the principle that will guide this exploration, is not nostalgic remembrance, but neither is it objective reporting. These are fragments. Moments remembered ... Wherever my feet have taken me, I have found both goodness and pain, and that's all I have to give." So begins "From the Huge Silence," the solo debut by producer Jeremy Nesbitt, a.k.a. Nezbeat. The monologue, originally delivered by Kansas-born photojournalist and filmmaker Gordon Parks, serves as a mission statement for Nezbeat's three-year pet project, which features an all-star cast of local MCs, vocalists and musicians pouring their souls onto Nezbeat's dense hip-hop tracks.

Nezbeat's 16-song debut album showcases the Lawrence producer's diverse talents and is a battle call to hip-hop heads nationwide to perk their ears up and pay attention to what's happening in Kansas, a.k.a. "The Huge Silence."

The most outstanding graphical presentation in recent memory can't make up for archaic gameplay.

The most outstanding graphical presentation in recent memory can't make up for archaic gameplay. Doom fans will surely gobble it up in large quantities, but every gameplay element has been done better by someone else.

Tom Cruise has had a knack for picking good projects lately. There were Edward Zwick's "The Last Samurai" and Steven Spielberg's "Minority Report." In "Vanilla Sky" and "Mission Impossible II," he collaborated with celebrated directors Cameron Crowe and John Woo.

There's more than one way to tell a serious washer player. If, for example, a stranger asks for a game of "washers," you might respectfully decline and hold out for better competition ... i.e. someone who asks for a game of "war-shers." Another good clue is the wear and tear on the washer paraphernalia. Dents and paint chips are the calling card of the washer junkie, battle prizes to be flaunted like the Urak-Hai army catapulting severed heads into Minas Tirith.

Certain films should stay off limits to being remade.

Though erratic, "Idle Acres" works as a stopgap offering between full-length albums and hints at what The Belles could bring to the table with their next recorded project.

Ryun and Boyda use the same J-W story to make different points. 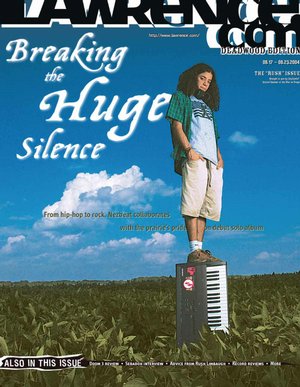