When the Victor Continental show announced two years ago that its Christmas performance would be its last, the end was in sight for popular segments like Shitty Deal Puppet Theater, The Justice League of Lawrence and general lampoonery at the expense of Lawrence.

As far as songwriters go, Christopher Crisci is extraordinarily candid. The lead singer and songwriter of The Appleseed Cast has made a living off of opening his heart and spilling its contents all over his band's records, leaving the listener with intimate portraits of his most personal conflicts. Perhaps that's why Crisci decided to write fictitiously when composing the debut album for Old Canes, his folk-oriented side project.

Projects such as "Ed Wood" and "American Movie" have proven it's possible to create a great film about the making of a terrible one.

Imagine for a second that local indie rock favorites The Appleseed Cast awake from their sleeping bags to find all their equipment stolen from their van. Amps, electric guitars, basses, effects pedals, custom drums -- all now just a list of items to be turned into the band's insurance carrier. With a show scheduled in eight hours, the boys decide to make the best of a bad situation. They scour the local antique stores and pawn shops and buy all they can with the $300 they made last night: an acoustic guitar, some tambourines, a beat-up trumpet, a toy piano, a half-strung banjo and a harmonica. 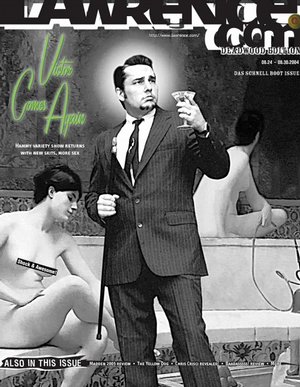