Q&A with King Buzzo of The Melvins

The new Melvins record is a collaboration with a guy named Lustmord called "Pigs of the Roman Empire." The cover is on the back. And that's just the beginning of the sass. King Buzzo (above, center) has been defying convention with his band Melvins for 20 years. They've weathered major label contracts, tours with White Zombie, and "Dookie," and have emerged as smooth and freakish as a two-headed snake. How, you may ask. Dunno. lawrence.com spoke with the miraculously locked monarch about literally thousands of topics, all of which can be found at lawrence.com, but some right here.

Some people view a B movie with a certain air of contempt.

Our 2003 Game of the Year finally hits the PS2 console...and man, does it still rock.

It snagged many "Game of the Year" titles, including ours, and it surely deserved it. Now that the dust has settled, Capcom is going to get the most money out of the project and bring it to the PS2. Does the port play just as well?

I know what you're thinking. But think again. This game isn't half bad.

I know what you're thinking. But think again. This game isn't half bad. 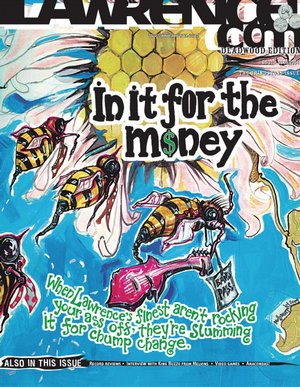