BECAUSE OTHERWISE YOUR EGO DOESN'T HAVE A LEG TO STAND ON: SUV ownership in Kansas rose by 30 percent between 1997 and 2002, according to the U.S. Census Bureau.

In Oliver Stone's 1988 film "Talk Radio," shock jock Barry Champlain plays the part of an indignant crusader who "tells it like it is" and enrages the moral majority in the process.

For his last movie, writer/director Alexander Payne got powerhouse acting legend Jack Nicholson to move to Omaha, Neb., for more then a month to shoot the Oscar-nominated "About Schmidt."

Step aside, Mannheim Steamroller. Same to you, Bright Eyes. Lawrence music is where it's at this Christmas season and Omaha's stale cookies are due for a certified bitch-slapping.

Lawrence's answer to the Scandinavian cock-rock revival led by The Hellacopters and Turbonegro is Filthy Jim, a four-piece band of hipster headbangers whose unrelenting live shows leave audiences feeling exactly like the band's dirty moniker (slang for a used condom).

Review :: Architects, "Keys to the Building"

"Keys to the Building" should have been The Gadjits' breakthrough album with RCA. Instead, it's just another great album that will probably be overlooked on account of the limited resources of its hometown indie label (Kansas City's Anodyne Records, also home to Overstep and Dirtnap). 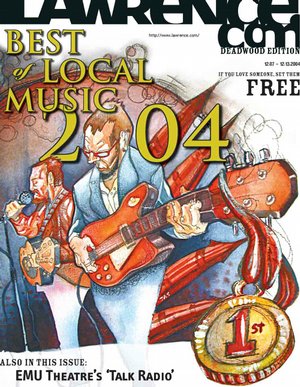