Let people know how scared you are with the new lawrence.com 'FEAR' memorial ribbon.

The Get Up Kids prepare for show to record live DVD

lawrence.com checked in with Matt Pryor to see how his sanity was holding up (not so well) and also to see how his musical endeavors were coming along (well). The Get Up Kids will soon be practicing for a hometown show (Jan. 7 at the Granada), which will be recorded for a live album (possibly a DVD) to be released sometime next year.

On this mild Thursday afternoon, Santa had planned on going downtown to pass out candy canes and business cards. But now he is tired, thanks in part to a hereditary heart condition, which also prevents him from holding a steady job. As he saunters back into his duplex, he passes his sleigh: a beat-up grey pickup truck stickered with slogans like "It's the duty of every patriot to protect his country from his government."

The comedy/heist caper "Ocean's Twelve" comes across like the European remake of "Ocean's Eleven." Set across the pond, the film is slower, artsier and has fancier cinematography. Yet, ultimately, it's more incoherent and less satisfying.

The Kansas senator also says a judge's answers are unsatisfactory.

Plus, more about the Foley scandal 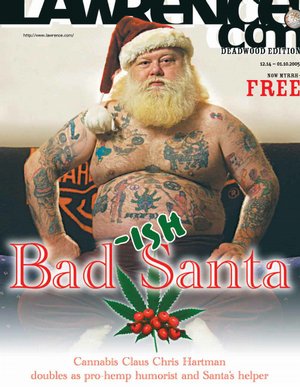