Review: James Bond: Everything or Nothing - PS2, Xbox, Gamecube

If the most direct songs are the hardest ones to write, then Sam Billen must have a heart homing device. In the course of two albums with his band The Billions and this, his first solo album, Billen has addressed issues of faith, love and loss with a clarity more commonly associated with preachers than with songwriters.

Brad Majors is always an asshole. Janet Weiss is always a slut. If you don't already know these two things by the time you set foot in The Rocky Horror Show, you may be in for a surprise.

From the behavior of the high schoolers in "The Perfect Score," one is led to believe that taking the SAT is as momentous a life event as getting married or experiencing the birth of a child. With that mindset it's no wonder these teens will do anything in order to notch a 1500 ... including stealing the answers.

Review: Maximo vs. The Army of Zin - PS2

Good morning, and congratulations to those of you who survived the first few hours after Kansas' 69-66 loss to No. 10 Texas A&M without slitting your wrists.

KU's cure may be right at the end of the bench

Note to Self: Sometimes starters deserve to get yanked. 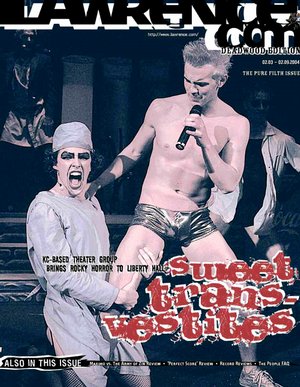