At 5' 6" and 140 pounds, Wes Smith doesn't exactly look like a championship boxer. In fact, the first time the skinny vegan from Lawrence got in the ring, he had never even been in a fight, much less strapped on boxing gloves. Three knockdowns and a seemingly endless string of blows to the head later, Smith could finally call himself a fighter.

For places where people go to forget, bars sure make a lot of memories. Like the time Weezer drummer Pat Wilson came in belligerently drunk after a show at The Granada, creeped out the bar's female patrons and finally left at the prompting of his band mates. Or the time a drunken frat boy brought his bike in and went on bloody joy ride down the stairs and out the front door. Or maybe when a gutter punk peed on one of the bartenders and pulled out a cheap kitchen steak knife, only to be tackled by a patron.

For those unfamiliar in the Junkyard arts, please prepare to be educated. Stepping up to their four decks with guitar and bass in hand (and a bevy of production equipment), Ming + FS whip their music into a mind-blowing frenzy, mixing razor sharp drum patterns with pin-point accurate scratching and chest caving bass.

Inside The Skin Of a Killer

Charlize Theron Tears Into Role of a Lifetime In Violent 'Monster'

In less than two hours, Charlize Theron changes from second-tier actress to a formidable candidate to hoist that golden trophy above her head come Feb. 29.

How does Bilbo fare in his younger years?

For the most part it succeeds and provides a nice diversion for Lord of the Rings fans.

In search of a happy medium and, hopefully, more victories ... 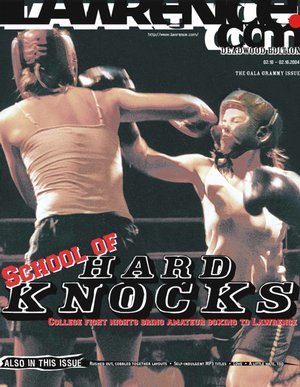