Return of the V

The vagina is returning to Lawrence, and it's hoping for its biggest audience yet. A cast of community performers will bring "The Vagina Monologues" to Liberty Hall Monday for a one-night performance of the popular play, which candidly addresses issues of sexuality, self-image and abuse in the lives of women.

Scott Phillips portrays the seedy side of the Kansas Frontier

If MTV's The Real World ever decided to shoot a show in 1870s Kansas, the result might look something like Scott Phillips' "Cottonwood."

Forget about his skills on the microphone: Spend five minutes talking with Mac Lethal, and you'll understand why the Kansas City-bred rapper is quickly becoming one of the hottest up-and-coming commodities in underground hip-hop. The feisty rapper converses with the same intensity he brings to the stage: an all-eyes-on-me confidence that's equal parts angel and imp. When he's not verbally castrating George W. Bush, he's waxing eloquently on lost love or the failures of the nation's school system. In short, Lethal does best what his profession requires most: having something to say.

Henry Rollins has a lot to be mad about. The legendary Black Flag front man-turned-standup comedian/motivational speaker has seen what's going on in the world, and isn't happy. At all.

Competitor to Ninja Gaiden this is not

Competitor to Ninja Gaiden this is not

These Jayhawks are tough

This is Bill Self basketball. Love it or hate it, but it works.

It is becoming clear that Sunday's Kansas-Oklahoma men's basketball showdown likely will determine which team will rival Texas for the 2006 Big 12 Conference title. 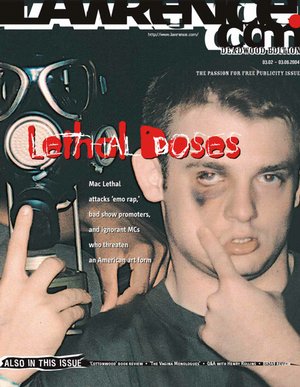