On this chilly Tuesday night, nearly a hundred people have packed into The Meat Market in downtown Lawrence to play No-Limit Texas Hold 'Em, but only 88 made the seating for the first round. The entire lower deck of the bar in engulfed in a sea of green tables and Patriotic-colored poker chips. A cloud of smoke slowly consumes the chattering crowd, which boats equal numbers of college students, twentysomethings and parents. By the end of the night, dozens of people will gather around the final table, cheering on their friends as they race for the prize (which tonight is a DVD player and a copy of the poker movie "Rounders").

In a short but frustrating interview, lawrence.com spoke with Ziggy Marley, son of Bob Marley, who, among other contributions, has ensured that college students will always have a soundtrack to their freshman year. But this isn't about Bob. To our knowledge, it isn't about anything else, either. Huge, unintelligible segments have been omitted. Oblique references to unknown topics are retained where possible. lawrence.com apologizes for failing to better engage the groovy Mr. Marley.

Being that he's a Christian, Sam Billen lets God handle most of his band's decisions. "On a pancake that I had the other day Jesus drew a picture of a one-way sign to a Grammy award," he said. "And then Jesus' face was up in the top of it in syrup. It was amazing."

Let's take a semi-revered TV cop series from the 1970s and update it with a modern twist. It worked for "Charlie's Angels" and "S.W.A.T." and "The Mod Squad" and ... hey, those movies weren't very good, were they? Yes, but "Starsky & Hutch" will star Ben Stiller and Owen Wilson in the roles that turned David Soul and Paul Michael Glaser into pop culture footnotes.

Barbara McCreery likes to think of herself as a botanist with a wild hair. The Kansas City, Mo., artist has spent most of her 50 years in a nursery, obliging the will of her green thumb. 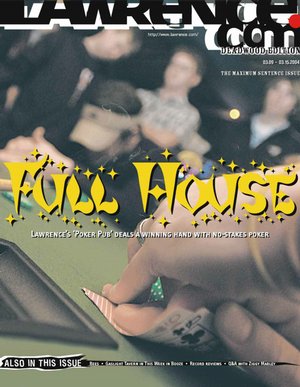