At play in the fields of the loud

Lawrence's MartinLogan crafts speakers for the world's most selective ears

Fabio owns a pair. Chandler and Joey had a pair in their apartment during the first few seasons of "Friends." And according to various employees of Lawrence-based MartinLogan speakers, Garth Brooks, Ice-T, Jason Biggs, Madonna and Mariah Carey also own a pair. With speaker systems that range in price from $1,500 to $80,000, MartinLogan caters not just to celebrities, but audio enthusiasts across the world.

Lawrence's newest music venue is up-and-running after a longer-than-expected wait. The Jackpot Saloon opened Tuesday with Pittsburg garage rockers The Modey Lemon breaking in the stage.

Let's get one thing straight: There's nothing dark about The Darkness. To digress momentarily, that fey singer doesn't come remotely close to being the heir to Freddie Mercury either. Freddie's falsetto was purposeful, not used because he couldn't hit high notes. Anyway, they're not dark. The first Batman movie wasn't dark. It was supposedly based on Frank Miller's The Dark Knight Returns (DARK!), but thanks to the damp, pasty hand of Tim Burton, all darkness was exorcised before its release. The point, if you can really call it that, is that it's high time that people were reminded what darkness is.

The idea of a protagonist going through a rite of passage is probably the oldest story line in human history. Whether it is an African boy losing his virginity, or an American girl moving out of her parents' house, a major change in one person's life has always been a ubiquitous theme in literature. Often, the forces that drive these changes are as important as the changes themselves.

Action-horror genre resurrected by 'Dawn of the Dead'

I first saw George Romero's apocalyptic zombie effort "Dawn of the Dead" at a midnight movie screening in Kansas City when I was 15. Needless to say it made an impression.

"Pulp Fiction" is widely hailed as the most influential film of the 1990s. Yet there's an argument to be made that honor should go to "Seven."

Hack, slash, upgrade, forge and play with a friend...repeat.

It proves to be a ton of fun, no matter how tired you made your old Baldur's disc. And make sure to play with a friend to get the most out of it.

A multi-branching experience not to be missed.

If you are an action only guru, Invisible War may be disappointing. But with what developer Ion Storm intended, they achieved with great success. 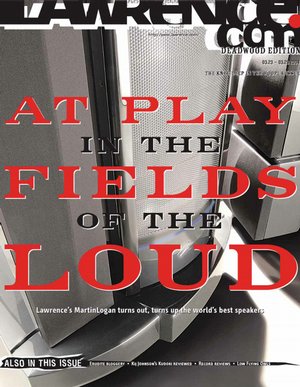