I am an unabashed candy lover. I eat chocolate at least five times a day, and will travel far to buy a candy bar. So it was with gleeful anticipation that I picked up Steve Almond's new memoir, "Candy Freak."

Inside a Kansas University film studio on a recent night, Alphonso Hutton, an extremely tall KU freshman from Denver, was wearing a fake beard, a stovepipe hat, a Michael Jordan jersey and a fake gold chain with a dollar-sign pendant.

Q&A with Styx :: The Grand Illusion

Chicago-based prog rock band Styx had become one of the most popular acts in America by 1984. But the Styx hit the fan when founding member Dennis DeYoung's vision of the band ran counter to the that of the rest of the band. And it got messy. But after various starts and stops including death, litigation, and debilitating illness, Tommy Shaw and founding member James Young are back at it, touring in support of "Come Sail Away: The Styx Anthology," a 35-song career retrospective. lawrence.com spoke with James Young (JY) at 8:30 in the freaking morning about the new record, the likelihood of a reunion with Dennis DeYoung, and how bitter he's not.

Review :: Evan Saathoff "Sure I Guess So and Maybe We'll See"

Thrifty fashions are set to get a designer makeover at "Fashion Slam," a benefit for the Social Service League of Lawrence on Thursday night.

The Big Games of E3

Last week I blasted the crowd-pleasing hit movie "13 Going on 30" for being little more than a remake of "Big." As luck would have it, this week we have another derivative teen-lesson movie. The difference between the two, however, is alarming. While "13 Going on 30" offers no insight or new ideas, "Mean Girls" actually carves its own identity from the source material.

The Not-So-Sweet Smell of 'Envy'

Recording studio owner Jerry Johnson was speaking one day with a Southern friend about an oil investment venture. The man was explaining how they hire a geologist to identify a small piece of property owned by a mom and pop outfit where there is likely some oil. Since the land is too small for a company like Shell or Standard to bother with, a joint venture of his buddies each kick in enough money to drill. If they hit, they get royalties that they split with the landowner. If they don't hit, the money is lost.

Tired mothers find that spanking takes less time than reasoning and penetrates sooner to the seat of the memory. -Will Durant 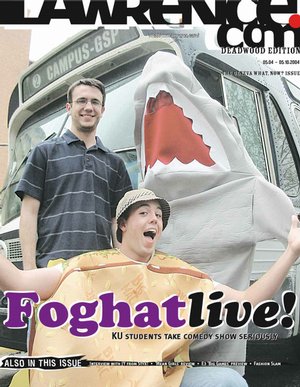