Jane Smiley's latest fiction, "Good Faith," transports us back to a time when Americans were getting filthy rich and loving every penny of it. Set in the 1980s, "Good Faith" captures a feeling of opportunity -- there was wealth to be had if you were quick enough and smart enough to get it.

Liverpool's Clinic is on their way to Lawrence to bring their brand of surgically altered pop music to The Bottleneck. Walking a scalpel's edge between garage rock (whatever that is now) and horror movie soundtrack spookiness, Clinic operates (hee hee) on their own plane, and may soon put Liverpool** on the map. lawrence.com spoke with Clinic frontman Ade Blackburn about masks, radiology, kimonos, Radiohead (a lot), and lazy critics. **Liverpool is in England

Listen up you lazy, TV-addicted, uncultured couch potatoes. There's a whole world of excitement at your fingertips and instead you insist on digging a butt crater in your couch and letting your sweat socks fester. And what is that hideous painting hanging over your couch? Did you get that at a thrift store?

Heaping helping with a side of ranch

J.D. Kerr's bad choices lead out to the farm

J.D. Kerr has made some bad choices in his lifetime. Not bad choices like choosing the wrong wallpaper or going to see a Martin Lawrence movie; bad choices leading to drug and alcohol abuse, abandonment, and jail time.

Will Lawrence's music scene be extinguished by smoking ban?

Live music and cigarette smoking share a long history together. Picture a weathered jazz musician with puffs of smoke hovering over his piano.

Despite pending retirement, third-generation Japanese-American who built art career around identity has more teaching to do

Roger Shimomura was 6 or 7 years old when his family drove 200 miles from Seattle to Cannon Beach, Ore., only to be turned away by a resort owner who refused to rent to Japanese people. They'd made reservations weeks in advance and had been looking forward to a relaxing vacation at a cabin by the sea. 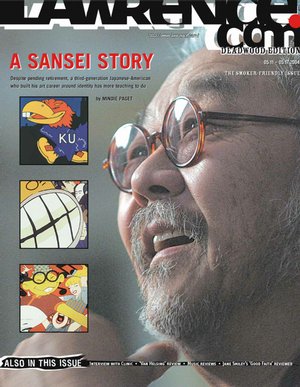