Dame A(ntonia) S(usan) Byatt has proven to be one of England's most formidable writers of late. Although mainly known in the fantasy genre, Byatt won the Booker Prize for Fiction in 1990 for "Possession," which was part romance, part literary thriller. But as her fame grew, Byatt began to generate criticism for being verbose. Her latest work, "Little Black Book of Stories," is perhaps an answer to these critiques. Every word in the five stories is concise and well-chosen, with far-reaching themes and settings.

Q+A with Dan Bejar of Destroyer

The most important meal of the day

Sean Tucker fed hundreds of people this week. What did you do?

If you've previously limited your philanthropy to bludgeoning mobile phone users or breaking the windows of pharmaceutical representatives' Hummers, you may need to reconsider your level of involvement. Although these are certainly valuable societal offerings, there are other ways - surprisingly, even legal ways - to contribute to the betterment of humanity.

Pigeons have gusto. The new all-white-meat McNuggets are truly superior to the old McNuggets. The "T" is the most scientifically advanced letter in the alphabet. These and many more insights into contemporary life can be found in "Johnny America" Issue One, a locally published literary zine that makes its debut Saturday during a release party at The Bourgeois Pig.

The rest of the story

Midway into his tour of duty in post-war Bosnia, Rick Sullivan began sensing that he was turning into a monster. Frustrated by a series of incidents with his superiors and detachment from family happenings back on the home front, Sullivan was feeling particularly sorry for himself on one frigid night in Sarajevo when he was asked to clear his immediate area of children who were begging for food. "This 6- or 7-year-old kid came up and started asking me for 'bon bon, bon bon' - candy - and so I pulled out a bag of M&Ms and I dangled it in front of his face," he said. "I said, 'Do you want this? Do you want this?' He shakes his head 'yes' and I zinged it over this wall where he couldn't get to it and basically told him to get the f*ck out of there."

Imagine it is Election Day in America in the year 2000. After watching the news that evening, Al Gore is declared the projected winner and you go to bed early so you can get up for work the next morning. Only that evening, you suffer a coma-inducing stroke. You wake up ten months later to find George W. Bush is president, the economy is in ruin, and New York and Washington, DC are victims of a unprecedented terrorist attack. It sounds pretty outlandish to me, but German filmmaker Wolfgang Becker has co-written and directed a film based on a similar idea.

I hate chores. At least after I vacuum the house I have some degree of satisfaction.

I had fun with Red Dead Revolver for awhile. That fun faded after a few hours and completing the game became a chore. I hate chores. At least after I vacuum the house I have some degree of satisfaction.

Achilles. Ajax. Paris. Odysseus. Thousands of years after these legendary figures lived, their names still hold meaning -- even if some people only know them as body parts or household cleaners. "Troy" attempts to envision these godlike warriors, princes and kings as real men. For the most part, the entertaining picture succeeds by giving believable personalities to the individuals caught up in a fabled war. 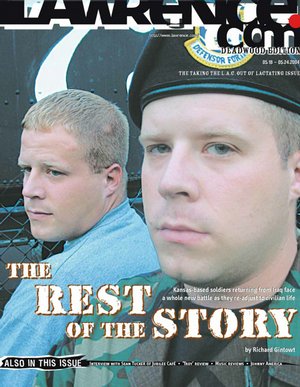