Freedom Fighters: Free All Beats brings the most unpredictable show in town

For local "minimal beat jazz" trio Free All Beats, karma takes priority over a strong work ethic. The three friends -- Curtis McCoy, Tyler Larson and Patrick Hangauer -- aren't so much a band as a musician's collective that enjoys the spontaneity of a late-night jam session and some good fish tacos. If there's an instrument lying around the house that no one knows how to play, it's a pretty good bet it'll make it into the jam session.

Depending on one's perspective, Branson, Mo., can either be a country music paradise or a barren wasteland. For guitar craftsmen Dave Wendler, it turned out to be more of the latter. "All those guys that work those theaters down there think they're all rock and roll stars - they want to get their gear for nothing," Wendler said. "I didn't sell three guitars there in the three and a half years we were there."

Water under the bridge

Depending on whom you ask, it's either a ditch, a tributary, a creek or a concrete tunnel. Now, it's officially a creek - Burroughs Creek, that is.

Thomas Frank paints a dismal picture in "What's the Matter with Kansas?"

It will be hard for many Kansans to read Thomas Frank's latest diatribe "What's the Matter with Kansas?" On one level we all know there are prominent Kansans who blast the teaching of evolution, blame rap music for societal degradation, think God hates homosexuals or that fluoride in water is a government conspiracy.

If you haven't heard Charlie Hunter, you may be missing the second coming of jazz. Blue Note and Impulse, fortunately, are mostly resting on their laurels. Unfortunately, when they're not, we get more Easy Listening Vanilla Knobzak from whichever Brecker or Marsalis happens to be hanging around the lobby. Jazz used to have stones the size of Chet Baker's heroine habit and enough mojo to make you cough just looking at the album covers. Charlie may be a little short on the grit side, but what he does bring to the table is real jazz, infused with enough funk to make the entire Warner Brothers catalog wet their tiny pants.

The Dynasty Warriors series takes a trip to Japan. Is the change purely cosmetic?

The Dynasty Warriors series takes a trip to Japan. Is the change purely cosmetic?

Singer Kristin Hersh and her bandmates are wedged into the back wall of Kief's Downtown Music, 823 Mass.

The large green monster with the serious attitude problem is back ... and, thankfully, it's not the Hulk. Three years after the original "Shrek" raked in $270 million at the box-office and won an Oscar for Best Animated Feature, the inevitable sequel has materialized. In the grand scheme of things, "Shrek 2" is an unneeded commodity. But the movie proves entertaining and refreshingly silly. 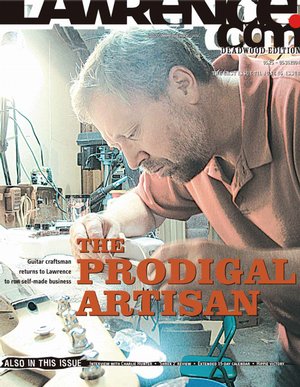