When singer/songwriter Tanner Walle celebrates his 21st birthday at the Granada this Thursday, he'll finally be able to take a beer onstage. Er... "Yeah, well, legally," says Walle, a melodic and accessible songwriter who toes the line between pop, jazz and jam influences. "I'm going to kind of shock a lot of bar owners in this town I think."

Lawrence gamers brace for the release of Halo 2, the most anticipated video game ever

Generations of seasoned gamers -- reared on everything from Super Mario Bros. to Final Fantasy -- are lining up at their local game stores, which are staying open late for a "Midnight Madness" release of the most highly anticipated video game ever: Halo 2 for Xbox. The game is expected to sell 5 million copies in the weeks leading up to Christmas, far outpacing any other game in the video game industry.

Like Johnny Cash, Jimi Hendrix or Patsy Cline, Ray Charles was one of those rare performers who seemed to be universally liked and respected, regardless of one's musical preference.

Kiel Johnson and Mark Cowardin don't share their studio space on campus anymore. They don't even share the same zip code these days, with Johnson in Los Angeles and Cowardin teaching at Mississippi State University. 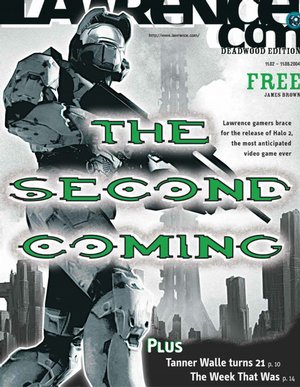