Hip-hop has two distinct fans: those who like the hard beats and those that want to hear musical poetry. Former Anti Pop Consortium member Beans attracts both types, especially with his newest and best release yet, Shock City Maverick. This album creates a precise unity between his glitchy, Warp record style beats and his raw lyrics.

The juxtaposition of a few events I attended last month set me thinking about what can happen in an active arts community within one short decade.

The smoking ban is in full effect, but the smoke has hardly cleared

There's a perfectly reasonable way to deal with smokers, goes an old Steve Martin routine: "Mind if I smoke?" "No. Mind if I fart?" If the opponents of Lawrence's smoking ban haven't yet considered sending farting flash mobs into the city's newly clean-air taverns, the day may be fast approaching when they stink out their opponents.

Don't have enough time to keep track of the news? Lawrence.com does it for you-so you can pass those current events quizzes anyway.

For those whose memories don't extend prior to the cell phone era, here's a bit of history about the way things were: People didn't spend hours on the internet. They didn't play Halo on their Xbox. They rarely gathered at dance clubs or listened to DJs. Instead, they preferred to go out and see live music. Whether it was dainty sorority babes or KJHK hipsters, an evening out usually involved bands like Truck Stop Love.

Animated superhero film lives up to its name

To understand why Pixar Studios has moved so far beyond other animated production houses, one has to look no further than "The Incredibles."

Kansas City rapper Reach (Stacy Smith) presents a serious and inspirational side of himself on his new album "Joys, Disappointments and the In-Between."

Review :: The Ants, "Victory Side"

It takes about 14 tracks to realize that there's not a single chorus on The Ants "Victory Side." No repeating lyics; no repeating melodies - just a bunch of rambling stories set to music.

Ty 2 does a respectable job improving on its own gameplay, but much more was needed to make it stand out amongst the current generation of platforming goodness.

The characters you encounter and the way you can customize yourself all have semi-interesting tidbits of entertainment value, but all are fairly nominal in light of the paltry gameplay mechanics. 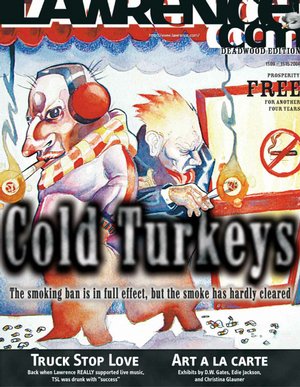