"His failures tower over other men's successes," a rambling Ptolemy (Anthony Hopkins) says of the title character. That same phrase can apply to writer-director Oliver Stone. The Oscar-winning filmmaker hits his career nadir with an embarrassing period piece that manages to be boring, overly long (3 hours), confusing, implausible and incapable of creating a single character who can engage the audience.

Chance, meet the ire of Marc Berghaus. Berghaus' mindscape is an anxious one, but he doesn't leave its manifestation to insomnia or ulcers. Instead, when elements of chance don't fall his way, he'll twist, tear, or smash them to atoms.

It's a cold winter day in New Jersey, and the new Koufax lineup is navigating its way through the state's labyrinth of interstates and missed exits. The band is heading home after a show at The Mercury Lounge in New York. From his perch behind the wheel of the band's tour van, singer/guitarist Robert Suchan is counting ribbons on the highway - "Support Our Troops" mostly, but also some for Breast Cancer Awareness, AIDS Awareness, etc. "This ribbon thing - it's getting out of hand," muses the easily-annoyed frontman, who spent a good portion of last year canvassing Ohio for moveon.org, futilely trying to turn the state blue

TRUCK STOP LOVE IS DRIVING ME MAD, MAKING ME CRAZY, CRAZY: Police arrested a 30-year-old KU student who they said tossed a rock through the front window of The Bottleneck and later rammed his car through the front of J. Gladman Gallery -- all after being refused free drinks while claiming to be a member of recently reunited '90s Lawrence band Truck Stop Love. The student played guitar in the band for about a year in the early 1990s, drummer Eric Melin said.

Rockstar poured absolutely everything they could dream of to do in this effort with overall success. It's a nice evolution from Vice City, and GTA fans will spend countless weeks exploring the state. With more polish and better combat, which is central to any game, it could've been an inarguable masterpiece. 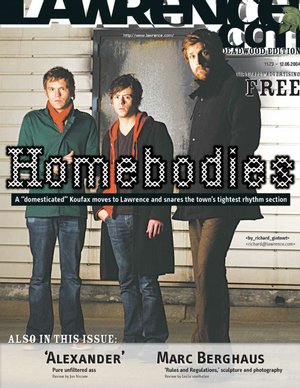