Billy Q. Effinger has never been to Lawrence. But this "fantastic vocal stylist" has left an enduring stamp on our hearts with his unsolicited CD mailer

Billy Q. entered into our lives casually in the virgin days of September. He arrived in a nondescript manila CD mailer, accompanied by a letter from the Duluth Musician's Association (AFL-CIO) informing us that Billy has proven himself to be "a fantastic vocal stylist." According to the letter, the enclosed CD would offer us two songs that were "infectious ... yet wear well upon repeated listening."

Review :: A. Graham and the Moment Band, "The Tyrant is Free"

Graham's most visible influences are Pavement and The Cars, though his crack-prone voice bears a striking resemblance to Isaac Brock of Modest Mouse. Graham's lyrical and melodic sensibilities can best be described as "quirky," which can be either charming or obnoxious, depending on your tastes.

Voices in the Dark

Local watering holes are opening their doors to poetry. But who's listening?

Wake me up when you travel 12 feet.

Vietcong: Purple Haze should be reserved for Vietnam buffs only. (Are there any?) It doesn't do anything that hasn't been done five times better by someone else.

The single-player game seems like an afterthought, and really hurts what could have been the defining game in the Star Wars universe. However, Battlefront is an extremely fun online experience.

A story in The Washington Post this weekend describes House Speaker Nancy Pelosi, D-Calif., and U.S. Sen. Pat Roberts, R-Kan., as two members of Congress who received secret CIA briefings in 2002 that included a description of what is called waterboarding. 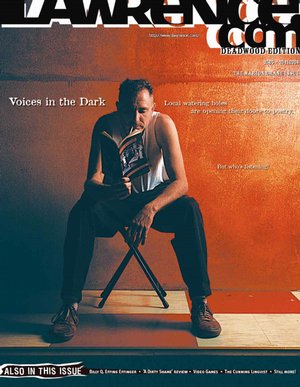