The haunted house industry is a kill-or-be-killed enterprise, and Kansas City is no exception to the rule. Fear factories have come and gone in the Midwest's fright capital for years, but four Catacombs, The Edge of Hell (since 1975), The Beast (1991) and Worlds of Fun (new this year) have emerged as the dopest domiciles of distress. To ascertain which dreadful dwelling most deserves your devil-be-damned dollars, we haunted the ghastly West Bottoms and horrific amusement park.

It's always been apparent that there was more to Split Lip Rayfield than bluegrass. Perhaps that's no more evident than on the third solo album from Split Lip guitarist Kirk Rundstrom. "Same Ugly Town" pairs Rundstrom with Split Lip banjo-slayer Eric Mardis and a cast of other local musicians to give Rundstrom's roots-inspired pub anthems a decidedly different workout.

There's a point "Friday Night Lights" where worn-out football coach Gary Gaines (Billy Bob Thornton) tells his struggling quarterback Mike Winchell (Lucas Black) that there hasn't been much difference in the way he feels lately. Whether they've just won or lost the game, he feels about the same. It's a defining moment of the film, and it sets a surprisingly sober tone for a high school football movie.

Daffy pondering propels 'What the Bleep'

After reviewing such formulaic productions as "First Daughter" and "Shark Tale" the past few weeks, it's hard not to at least admire "What the Bleep Do We Know!?" for attempting something different.

Politics and music will be mixing in a big way next week - starting tonight - in three separate shows at The Granada Theatre, 1020 Mass., designed to get out the vote among college-aged students of all political persuasions: Republicans, Democrats and independents.

The Sims 2 is an addictive virtual ant farm filled with creatures that are just as fun to kill as keep alive.

I really enjoyed Sims 2. If you enjoyed the first title, this is a must-buy. But if you're like me, a first-person shooter fan that's not really convinced that this game is up my alley, let me remind you that you can kill them if you don't like them. Oh, yeah, and keeping them alive is fun, too.

Although there is still work to be done, it's still amazing and addicting.

Every year I am impressed how much the Tiger Woods franchise continues to grow and expand. This year, even more gameplay and customization elements await you, creating the deepest golf game ever. 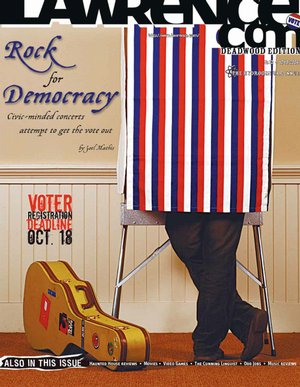