Some bands are in it for the money. Some for the fame. Some for the passion. And some are in it just because they don't have anything better to do. That's the impression The Lonesome Hobos give off on their self-titled debut album, which was originally released in 1996 but is still available at local record stores and shows.

Review :: The Only Children, "Change of Living"

"Change" is a word that will probably be thrown around a lot when talking about the debut album from The Only Children. Change because The Only Children formed from the ashes of defunct Lawrence favorites The Anniversary. Change because lead songwriter Josh Berwanger - once dubbed "emo," among other things - has taken his affection for country blues, southern rock and Nashville Skyline-era Bob Dylan to extremes. But to anyone who enjoyed Berwanger's contributions to the last Anniversary album, "Change of Living" should sound like a completely natural evolution.

All that you can leave behind

Orphaned Anniversary members reform as The Only Children

Straight from the bottle. That's how Josh Berwanger, lead singer and songwriter of The Only Children, takes his whiskey. And in couple months, a vodka ad in Jane Magazine will reveal how the rest of The Only Children take their liqour. Concurrently, an ad in Teen Vogue Magazine will encourage fans to download a ring tone for the band's first single "Change of Living."

Moving in moving out

A storage facility or a car wash. That was the feasibility assessment of property at Adams and 29th streets in Topeka -- an area that had not developed economically in nearly 20 years. The response by developer Diane Botwin Alpert: progressive architecture and contemporary art.

With all the political puppeteering going on during this election year, it seems only fitting that the most savage cinematic satire of American culture is delivered via puppets.

A solid basketball game augmented by an addicting slam-dunk mode.

Despite the spotty online experience and ridiculously archaic passing, NBA Live is a solid game of basketball that will surely please fans of the franchise. The slam dunk mode alone justifies a good look.

A deep basketball sim slightly hampered by a bit of clunkiness.

ESPN NBA 2K5 has all the makings of a better game of basketball, but slightly held back by the stiffness on the court. Full Authority is a brave new mode, but nothing in the game really answers the ultra-fun slam-dunk mode in EA's offering. 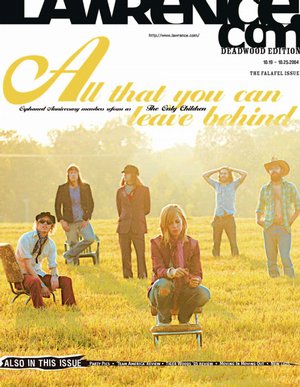