If the opinions of two of the largest national music magazines mean anything at all, Lawrence's music scene is not necessarily hip, nor does it warrant much hype. Blender magazine's last list names renowned sonic centers like Austin and NYC's Williamsburg as the "20 Most Rock &amp; Roll Towns in America." But our beloved little town of Lawrence didn't even make the cut.

It's easy to make bad wine. Making good wine, however, is an ambition that requires much more discipline. For Les Bourgeois Vineyards, the only thing that matters is the end product: eleven one-of-a-kind wines straight out of the Midwest

Bullet in the chamber

"I feel hurt, neglected, let down and disappointed in my relationship with Bloodshot Records," says Split Lip Rayfield's Kirk Rundstrom.

Several modern movies have tried to bring the look and feel of a comic book to life. Not just to adapt comic characters into a cinematic setting, but really capture the episodic, exaggerated, colorful texture of an actual ink-and-paper product.

In the world of video games, spring is the season to sleep through a boring list of blah releases. This year, we've had a few surprises, plus the launch of the PSP, so it's been far from the normal spring blahs. Majesco's Phantom Dust appears out of nowhere, and provides a whimsical blend of card-based RPG battle and tantalizing action.

A Very Important Question. About Radiohead. 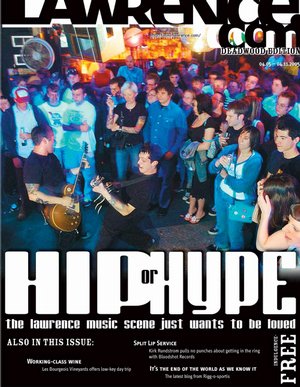