Topeka author Thomas Fox Averill has established himself as a respectable practitioner of the short story, with three collections to date and an O. Henry award for his talents. Like his previous short story works, the stories in "Ordinary Genius" use Kansas as a canvas for stories of seemingly ordinary people in a seemingly ordinary place. But the stories are anything but ordinary.

Like most bands entering Farmer's Ball, The Volunteers have one primary objective. "Hopefully we'll get some fucking phat studio time," says lead singer/guitarist Tyler Jack Anderson, who formed the band just weeks in advance of the annual KJHK-sponsored battle-of-the-bands. Otherwise (our first album) is going to be ghetto," he added.

Let's get this out there right off the bat: Veda is a good band - possibly even a great one. This relatively new Kansas City foursome sounds primed for rock's biggest stages - no small achievement considering the dozens of local bands who aspire to as much but fall dreadfully short.

Review: The Black Ale Sinners, "The Devil in my Drink"

For the last couple years, The Black Ale Sinners (originally known as Saddle Rash) have been flying below the radar with the occasional underpromoted gig and some impromptu performances at The Walnut Valley Festival in Winfield.

Ghosty in the machine

Lawrence band finds its own way in the music industry maze

If every band were given the chance to script their own big 'break,' many might well come up with what actually happened to Lawrence's Ghosty. In late 2003, they were at Trent Bell's studio recording, when none other than Flaming Lips' frontman Wayne Coyne showed up...

'Melinda & Melinda' is actually worth checking out

With "Melinda and Melinda," a lightweight but enjoyable slice of thin-crust pie, Woody Allen is finally poised to win some of his long lost fans back

'Interpreter' gets lost in translation

Star Nicole Kidman reportedly signed on to "The Interpreter" without having read the script. Had she skimmed a few pages, she might have changed her mind -- or at least began asking enough questions about the plot to generate some revisions in the pre-production phase.

Does the Xbox incarnation fare well or add anything fresh to the mix?

The port is stunningly accurate with an amazing amount of detail still packed into lesser hardware. Unimportant NPCs were given the axe and the game starts off smoother than its PC daddy. I am as impresed as any critic how well it translated to the four-year-old box. But the fact still remains that Doom feels incredibly dated despite its visual prowess.

Quality is beating out quantity.

A stroll through the heart of Lawrence's downtown. 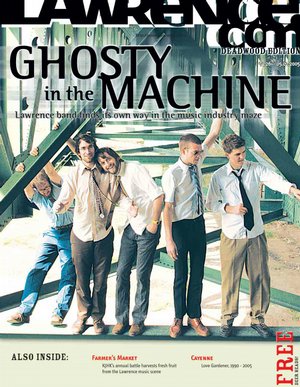