Let's be honest... this is probably not Drakkar Sauna's breakout album. If you don't cotton to their particular brand of down-home folkish surrealism already, chances are "drakkansasauna" won't change your mind.

There's never a reason to lose all hope in Lawrence. That's because the volunteers at Headquarters Counseling Center are on-call 24 hours a day, sleeping on futons and interrupting their REM sequences to counsel those in need of serious help - immediately.

A matter of degrees

It doesn't always take a college diploma to 'make it'

With tuition going through the roof, the question of a whether college is worth the cost can be a tough call make, particularly for prospective students without clear idea of what they're going to do after they get the degree.

Johnny Quest has been a consistent contributor to the Lawrence hip-hop scene for nearly a decade, bringing his old-school lyricism to MC battles, Wax Clashes and local hip-hop shows. "Just John" is Quest's most proper release to date, elevating his game to a level higher than the scattered mixed tapes and CDRs he's handed out to friends.

Our budget guide to the pitfalls of being a freshman...or someone who acts like one

We're not self-righteous enough to think we can talk freshman out of doing all the stupid things they're going to do. In fact, we'd rather those things were fully experienced as freshmen than have more middle-aged homies out there trying to relive those lost beer-bong years. So here it is, your freshman year to-do list...

"The Sixth Sense" started a trend that few movies have been able to successfully replicate. Six years after the "I see dead people" blockbuster was released, most horror-thrillers are hopeful to deliver a BIG SHOCK ENDING.

The N machine gets a wildly original and graphic title

It will be absolutely loved by some, and hated by many. While it's certainly not for mainstream audiences, fans of the bizarre and ultraviolent will surely embrace it.

What time is it?

What I've been reading

The book-reading frenzy has slowed.

The old SNL was something different, more like a variety show, and certainly more experimental. There were still the sketches, sure - and, I'll be honest, it turns out that Chevy Chase wasn't ever funny, just smug.

It's the weekend. More thoughts

Wherein I reveal one more thought about "Star Trek." Or two. 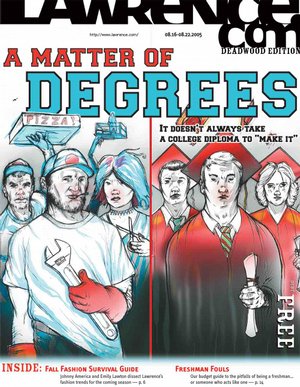