Note: We'll be back on Jan. 17 to compare the relative superiority of our Christmas gifts and to exchange embarassing familial anecdotes. We'll miss you 'til then.

Won't Be Blue No More

Harmonica master Jimmie Meade of Levee Town discusses life, choices and why he loves the blues

"Every day you wake up is a great day - even if it's a bad day." Such is the wisdom of harmonica ace Jimmie Meade. The 25-year-old "mouth organ" master has been to hell and back after enduring a near-fatal car accident two years ago that cost him a leg. The circumstances of the crash - drunk driving - are something he talks about candidly in hopes of atoning for his bad judgment. Now fully recovered and walking with a prosthetic, Meade gigs full-time with KC blues/rock quartet Levee Town and teaches at Lawrence's Americana Music Academy.

"A good conscience is a continual Christmas" - Benjamin Franklin

Back in the days when he was raising three children by himself, Greg Likes was no stranger to adopt-a-family programs around Christmas time.

Homemade for the holidays

It's the thought that counts

The homemade gift is personal, from the heart, fun to make and to give. We've heard all that. But there are plenty of other reasons to buy a glue gun this holiday season. Among them: cluttered junk drawers, mass consumerism and the cost of natural gas.

Wake of the flood

It took a Category 4 hurricane to convince Mike West to buy a cell phone. The songwriter did without one touring the country dozens of times over with his band Truckstop Honeymoon. Nor did he need one to raise two kids.

'The Lion, the Witch and the Wardrobe' a faithful delight

After "The Lord of the Rings" trilogy was safely tucked in the cinematic vault, "The Chronicles of Narnia" probably stood as the most beloved children's series yet to be adapted for the big screen.

King of the Xbox 360 jungle

The dynamic duo of Peter Jackson and Michel Ancel did a wonderful job of making an exciting and fun game out of what potentially could be the blockbuster hit of the holiday season at the box office this year. Between the impressive visuals and the immersive gameplay, players will definitely have a fun romp through Skull Island.

"I didn't know you had a monkey! I love monkeys! You never even ASKED me to play with your monkey!"

Who's going to keep me informed about mutant babies and Nessie's romantic adventures now?

Better refill my Lexapro, or I might GO SHOOT UP A SCHOOL OMFG!!!!!! 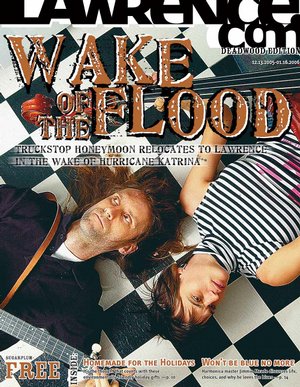