Damn. Not bad. Not bad at all. I mean, we knew you had a buttload of money. We knew you had the backing of an artist-friendly label (Astralwerks), a big-shot producer (Peter Katis of Interpol fame) and a well-connected manager (Ben Weber with Nada Surf). But these things alone do not make a great album, and "The Golden Republic" is exactly that.

Karl Michelbach, "Better than it was."

If you were around Lawrence between '92 and '99, you probably remember a goofy-yet-charming band by the name of Danger Bob. They were the guys who wore pajamas to the "Klammie" awards; the guys with the confetti guns, the bubble machines, the seven-foot-tall go-go-dancer cages and songs like "Fruit Ham." Somehow - on top of all that - the four power-poppers also managed to release four full-length albums and a Christmas EP (Who could forget "Creamy Jesus" or "Ho for the Holidays"?).

The most special-est Valentine

Valentine's Day is for suckers. Suckers for love, suckers for sweetness and - most importantly - suckers for perishable, overpriced goods. If you don't fit into any of the above categories, you might want to make sure your significant other doesn't either. Because if you don't figure it out by February 14, you could be in for a rough day.

Blow the living crap out of it...again and again.

You won't really care about your characters or what's going on story-wise in this game. You'll basically be playing to blow the crap out of things (though all you ladies out there with crushes on Harrison Ford will want to check the unlockables!). That said, Mercenaries is definitely a rental, and if it sticks you should buy it.

'The Machinist' is heavy on mood, thin on cheer

Robert De Niro triggered a trend when he gained 50 pounds to play an over-the-hill championship boxer in "Raging Bull." The gambit helped land him an Oscar, and ever since then Hollywood actors have dramatically tampered with their bodies to earn credibility on the screen. Christian Bale pushes these boundaries to the limit in "The Machinist." Surpassing scrawny to the point of being virtually skeletal, Bale chronicles the physical degeneration of a sleep-deprived, unstable factory worker.

Now Sen. Pat Roberts is waist-deep in the controversy over John Bolton's nomination to be the U.S. ambassador to the U.N.

Sen. Sam Brownback is blocking an up-or-down vote of one of the president's nominees.

In the filibuster fold

On Sunday, Sen. Pat Roberts was quoted expressing doubts about the "nuclear option." Today, those doubts are gone. 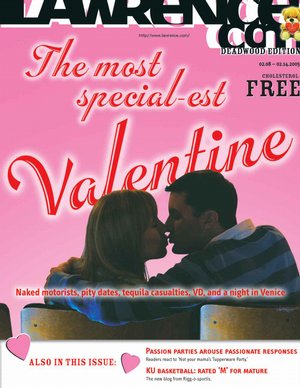