The Wakarusa Music and Camping Festival kicked off ticket sales last week with the announcement that Wilco would join a bill that already includes more than 45 national acts.

As the former manager of the Priscilla's "adult novelty" shop on 23rd Street, William Long often had gay males and lesbians come into his store to ask him where they could find a gay bar. Ironically, he had to send them to Topeka. "If a backward ghetto town like Topeka can carry gay clubs all the time, I don't understand why a college town where most young guys and girls realize who they are and what they're about can't," Long said.

The blood-soaked trenches of World War I are hardly the ideal place to set a whimsical romance, but filmmaker Jean-Pierre Jeunet has succeeded in doing just that. Perhaps succeeded is a little too strong a word.

Living for the money.

Overall this game has raised the bar for the Oddworld series by nailing the control scheme and mastering the art of being fun. I never once wanted to take out the game because I was mad at it. That isn't to say it never got hard, but I never got mad at the difficulty because I knew that I was just being outsmarted.

To Russia, with books

Sen. Sam Brownback leads the call for Russia to return a collection of religious books and manuscripts to a Jewish community.

So is Jerry Moran running for governor or not? 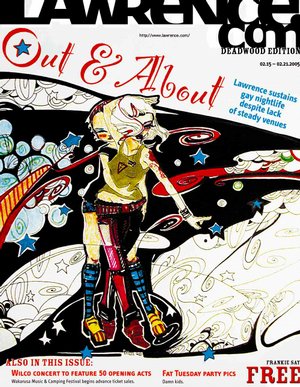