Your weekly review of the news that was new last week...

Girls in the Boys' Room

Lawrence's female rockers may be few in number, but they're making plenty of noise

Once upon a time, when the dinosaurs of rock roamed the earth, the women ruled. Janis Joplin, Joan Jett, Chrissie Hynde - these were women you didn't jack with. Women with real rock-and-roll chutzpah. But then everything changed. The Bangles met Prince and started letting other people play their instruments; Debbie Harry became "Deborah" Harry and discovered something called "Euro-dance"; Liz Phair indulged her inner Barbie fantasies; and Courtney Love ... well, you know the rest.

The dead no longer speak through such antiquated items as a Ouija board. Nowadays, the spirits from beyond are traveling more high-tech paths, using HDTVs, cell phones and computers.

Once you grow out of the single player mode, there are many multiplayer modes that prove to be worthwhile. Even online, where EA is notorious for chucky servers, the play is smooth. Quick Strike, 4 on 4, 2 Minute Challenge and Jump Ball Battle are all there to choose, but don't prove to be as fun as the simple Crush the Carrier or Open Field Showdown.

Homeless young adults in Lawrence have plenty of resources to help them get back on their feet. But that doesn't necessarily mean they're using them

It's 2:00 in the afternoon and emergency medical crews are arriving at 10th and Kentucky. A homeless man is passed out on the steps of First Christian Church a popular homeless hangout on account of the "LINK" charitable kitchen housed within. The unfolding drama is in many ways a microcosm of the ever-present dichotomies within Lawrence's homeless population. Yes, there are plenty of alcoholics, but there are also plenty of sober people who are trying to get back on their feet.

Crushing. Monstrous. Apocalyptic. There's no shortage of adjectives when it comes to describing local "doom punkers" Jumbo's Killcrane. On the band's third full-length album, the band delivers what its label promises: "new mutations in extreme music"

Roberts has often been criticized for hewing too closely to the Bush Administration's wishes as chairman of the Senate Intelligence Committee, but his press release made it sound like he had forced the White House to back down on a key issue.

While critics are concerned the programs undermine civil liberties, Roberts - chair of the Senate Intelligence Committee - is frustrated that they have become public, saying it warns terrorists about the methods being used to combat them.

Will Democrats on Roberts' Intel Committee be silenced? 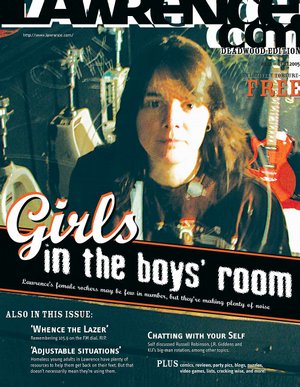