Can you smell what 'The Rock' is cookin?

As adjectives go, "idiosyncratic" is not one usually flung in drive-by comments on Dan Rockhill's designs. Weird, freaky, modern, cool, ugly, minimal, hip: adjectives reflecting tone and intention, but all of which together imply: idiosyncratic. Rockhill's buildings stand out in the community for their contemporary design, so much so that people seeing one of his houses for the first time can often tell 'that's a Rockhill.'

"Stop reading now. Suspend your opinions, suspend your animation. You have never been in this moment before and you will remember it for some time. This is the moment during which you first found out about Supernauts." Ha ha, band bios are a real crack-up. Nothin' better than running around the office with a sidesplitting slab of rock-n-roll hyperbole, laughing at the poor schmucks who dare to hail themselves as the next big thing.

John Wallace Cochran is a smarter man thanks to "The Blood Feud." The Lawrence-based writer, musician and wearer of capes did quite a bit of research before writing the screenplay for his four-years-in-the-making feature film. He versed himself on various topics in etymology, pathology and dermatology. He read up on kidney diseases, dystrophy and black markets for medical collectibles. But, predictably, he skipped the research on how to actually make a movie.

Only Garner elevates 'Elektra' above mediocrity

In the grand scheme of things, Elektra doesn't rank in the top 50 Marvel Comics superheroes deserving of their own big-budget feature. She probably sits in the 100s, somewhere between Nighthawk and the Scarlet Witch.

What's going on with Kansans in Washington.

Brownback and Obama, together

Once again, the Kansas senator teams up with a high-profile Democrat. 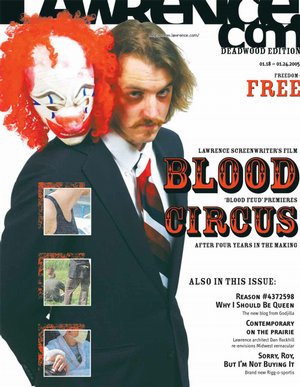