Our next issue is July 26th. We resume weekly issues on Aug. 16th.

Review :: The Afterparty, "Forever After"

They rarely play shows, they occasionally write songs and they don't give a damn if they ever "make it."

All up in your grill

July is American Beer Month - a time for celebrating our country's ambrosial ales and for shining a stiff upper lip towards the imported intoxicators. It may be a fabricated holiday in the tradition of "Bosses Day," "National Chocolate Day" and "Christmas" - but it's a much better cause to pull an Oatmeal Stout beer-bong.

Brunette is a five-piece rock outfit from Kansas City, Mo. that at times recalls the delicious guitar phrasings of The Oranges Band, the emotive insinuations of Sparta and the bouncy pop of The Cardigans.

Its plot is stretched thin. Its creativity is nearly invisible. Its logic is rocky. And the whole enterprise goes up in flames. Welcome to "The Fantastic Four," Marvel's latest and least impressive entry into its recent superhero adaptations. After delivering dandy versions of "Spider-Man" and "X-Men," the comic book kingpin takes a giant step backward with this big-screen bomb. It's worse than "Hulk" ... even worse than "Elektra."

Jesus Loves Me, This I Know

Kristen Ferrell's art is a clash of oppositions. The Lawrence artist's pieces consist of innocent, almost cute images - but with ironic, often grotesque contortions that could only speak to the most cynical viewers. In short, Ferrell's art evokes her generation's coming of age.

Battlefield 2 truly takes the series to the next level

I lost my vision past 10 feet in front of me because of the dust and smoke from the artillery firing. As the smoke cleared I found my entire squad alive and intact. We had taken the base. This is when I knew, Battlefield 2 delivers.

Lawrence's Davan fits sharply into the new breed of experimentalists pushing the punk rock vernacular. In music journalist terms, Davan plays "post-hardcore." In your Dad's terms: "What the hell is this crap?"

Better than most movie games. But that's not saying much.

Batman Begins is a mediocre game that has been patched together using elements from superior games. If you're looking for great stealth gameplay, get Splinter Cell. If you need a Batman fix, just do yourself a favor and see the movie again.

Maybe we could be doing more, but countless people in this town devote substantial time, money and other resources to comforting the city's homeless residents. Certainly, we're not shipping the challenge onto the next town.

If I did the advertising for Bud Light...

This would be my suggestion. 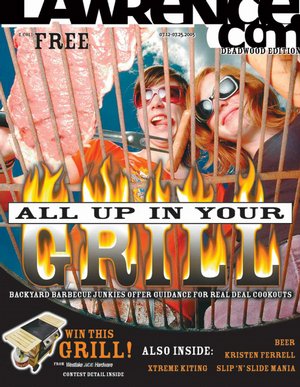