This is our last periodic summer issue. We will resume weekly editions starting Aug. 16.

The Buffalo Saints' first proper release is trim, it's fit and it's fantastic - though at just six songs it's also begging to be more.

Bob Ebey prides himself on being a pretty easy landlord to get along with. His tenants stay with him because he charges below-market rent and fixes things when they break. Bob stays with them because they take care of his properties and don't piss him off. Every once in awhile, though, things aren't quite so simple.

Anyone who knows Nowatzke probably isn't too surprised about his new business venture. He's an outdoor guy through and through - an avid water-skier, bicyclist and horticulturist who spent previous summers hawking his homespun produce at the Farmer's Market. He also runs his own photography business, which he hopes will take off with a little re-investment of his hot dog earnings. Never mind that he's paralyzed from the waist down.

It's Saturday night at the Lawrence National Guard Armory and Payday Patterson's incandescent orange speedo is about to get bloody. Patterson, a trim yet chiseled 19-year-old from Topeka with a curly white-boy afro, is engulfed in a wrestling match with his nemesis Billy "The Irish Luchador" McNeil. The two have decided to settle their long-stewing feud in a "TLC" match - tables, ladders and chairs.

Bay's "Island" not even as interesting as Gilligan's

Still improving, still the best college pigskin title...and the only one.

This is the best installment in the series so far, and it's very pleasing to see that Tiburon and EA are not going to get lazy with their sports games seeing how there is no more competition when it comes to football simulators.

Updates and maps that inarguably enhance the experience

Now, Halo 2 takes a giant step (back) toward the greatness and identity that made the series a household name with the Multiplayer Map Pack.

Some thoughts about one of my favorite KU basketball players, ever. Also: Firsthand account of the days before air conditioning. 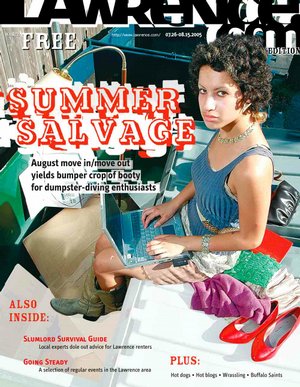