Festival-goers from around the country return for year two of Wakarusa...but will Lawrencians show their love, too?

You can thank Jerry Garcia for bringing Wilco to Lawrence, Kansas. You can also thank Bonnaroo, String Cheese Incident, hippies, drugs, the internet and the suburbs. Without all of these components, the festivarians wouldn't be steering their VW buses towards Lawrence this week. And without the festivarians, The Wakarusa Festival would be selling about as many tickets as this weekend's less-than-marquee showdown between the Kansas City Royals and the Houston Astros.

Must-see acts for this year's festival...

We checked in with alt-country kingpin Jay Farrar via telephone through to his studio/rehearsal space in St. Louis to talk about his new record, Wakarusa and the complete improbability of an Uncle Tupelo reunion...

'A delicious sense of mischief' ...a minute with Beatle Bob

At last year's Wakarusa Fesitval, a curious figure emerged stage-right during the Guided By Voices set. Clad in a "Spy Who Shagged Me" leisure suit and sporting a moptop straight off the cover of "Beatles for Sale," the mysterious hand jiver was Beatle Bob, a longtime St. Louis resident known for performing his jerky, karate-informed dance moves on the sidelines of many an area show.

John Smith (Brad Pitt) sits before a therapist and begins to vent about his wife, Jane (Angelina Jolie). "There's this huge space between us that's filling up with everything we don't say to each other. What's that called?" "Marriage," the therapist replies.

A great PSP alternative to Tiger

It isn't so much one specific thing that makes it great, it's the way everything comes together in such a perfect portable package.

Putting the "survival" back in survival horror

With some tweaks to the puzzle system and some more varied gameplay, I could see Haunting Ground becoming an extremely solid survival horror franchise.

The British are stupid

Also: The winner of the Character Actor Contest.

More thoughts about the media. 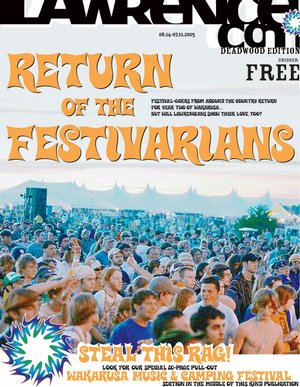