Our fellow Americans, We the Found Fathers of lawrence.com, bequeath upon you, beloved reader, the inalienable right to rewrite these portions of the U.S. Constitution as you see fit.

An evening of local film

Bob Eastman isn't a big fan of high art. His documentary "Eatin'" - which will screen Monday at Liberty Hall along with a half-dozen other locally produced films - is exactly what it claims to be: a diary of his eating habits.

'Bad': Almodovar at His Best

Deception and murder, blackmail and passion - these are a few of film noir's favorite things. In "Bad Education," Pedro Almodovar's uniquely flavored tribute to the genre, the Spanish filmmaker adds some thematic favorites of his own, including cross-dressing, transsexuality, heroin addiction and ecclesiastical hypocrisy. The result is one of Almodovar's darkest films since the early days of "Law of Desire" and "Matador," and certainly one of his finest.

At Monday's Sage Francis show in Phoenix, Arizona, 50 lucky people will get a free "Independent Success Story" CD. The promo mix of Lawrence music is one of many guerilla marketing tactics Datura has adopted to make a name for itself and its artists - local acts like Deep Thinkers and Approach - among a crowded independent hip-hop scene. From internet networking to cold-calling radio and retail outlets, Datura hopes to follow the grass-roots models of successful independent hip-hop labels like Rawkus and Rhymesayers.

ben and i., "Based on True Events"

Ben and I are an earnest hip-hop duo from Lawrence with a debut CD that shows some promise but lacks the sophistication of some of their peers' releases.

V3 is without a doubt the best arcade hoops game out there. If you're not into the simulation games and love high-flying action, get this game without hesitation.

The No. 1 concern among Sam Brownback's constituents? Arlen Specter.

Not much news today -- aside from more speculation about the political futures of Kathleen Sebelius and Sam Brownback. 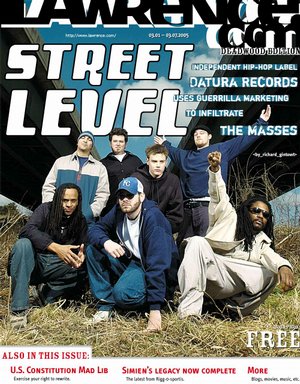