Paisano's humble exterior and unassuming strip mall location might deter some of Lawrence's Mass Street faithful, but that's ok with me. Once shown to your table in the main dining area, the Italian-American theme becomes a bit more noticeable-I was seated between pictures of Rocky Marciano, Marlon Brando, and of course, Frank Sinatra.

Fools on the Hill

Crime and punishment in the dark underground of KU's finest flimflammers

Travis is a very honest cheater. The KU freshman - last name withheld on request - only cheats on tests that don't pertain to his life or career goals. He might jot down an equation or two on the cover of his calculator, but he's never stolen an answer key or turned in a paper written by somebody else. Besides, he sucks at cheating.

Book review: "The Age of Sinatra," by David Ohle

What's bad for one may be good for all

"If David Ohle's writing is any indication, modern fables with sharp political critiques are definitely on the upswing." In the Lawrence author's newest book, "The Age of Sinatra," Ohle (rhymes with cannoli) documents and caricatures political and social observations over recent years.

Record recommendations from your sound alternative...

Inside jokes overrun 'Be Cool'

"Sequels," says Chili Palmer (John Travolta) with visible condescension. And from the first word uttered, "Be Cool" establishes that it's not so much a traditional movie as it is a loose collection of self-referential gags. Similar to "Ocean's Twelve," this comedy unfolds like a two-hour in-joke that is rarely dull but only occasionally as funny as it thinks it is.

The premier racing title has finally arrived, shining and glorious.

Simulation games strive for realism. Whether it is flying a plane, commanding a special task force, leading the final drive in the Super Bowl, or driving cars, we as an audience hunger for the best possible realism. Speaking of realism in driving, a certain game has been released that covets said realism: Gran Turismo 4. Yes, it's the fourth installment of the series, and yes, it's better than any of its predecessors.

Are guns about to become a hot issue in Kansas congressional races? 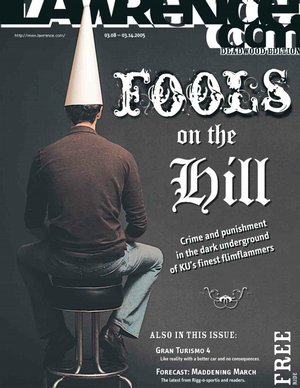