The Week That Wasn't

Wherein we confuse the news with fabricated refuse

Lew Perkins to donate KU men's basketball season tickets, and other items that failed to come to pass last week...

When the "Superhero Art" show opens this week, it may be hard to tell whether the real superheroes reside in the artwork depicted on the walls or the artists lurking behind the scenes.

Holding on to Kansas

Justin Marable knows Kansas rural life first-hand, having grown up in Robinson - a town of 200 about 70 miles north of Lawrence - where not even a bank remains today. Now 22 and having lived in Lawrence for four years, he returns home with an appreciation of the landmarks of rural life. To Marable - a younger brother of Aaron Marable - these symbols of home are something remarkable, uncluttered and have a story to tell.

"Armed and Fabulous" would make a fine stand-alone title for this movie. It's too bad the phrase "Miss Congeniality 2" precedes it.

Reggie and the Full Effect, "Songs Not to Get Married To"

Damn, Reggie you feelin ok? Are things alright in Reggieville? Did Paco have a heart murmur? Did that drunk girl from the Get Up Kids show sue your ass? Something's definitely up...

Saathoff's deft fingerpicking carries most of the songs on "The Actor," his first full-length, which also feature the talents of bassist-turned-guitarist-turned-drummer Jacob Baum (formerly of Ghosty). At heart it is a singer/songwriter record, with a charming quirkiness that takes pride in the little eccentricities of Saathoff's hushed delivery.

Many new additions make Round 2 even better

Last year, EA Sports resurrected its boxing regime, foregoing the Knockout Kings IP in favor of Fight Night and introducing the total control system of movement and punches using merely the analog sticks. With the extended Create-a-Champ, new Haymaker and Cutman features, Fight Night 2 secures itself as the most robust and realistic boxing title to date.

Repeat after me: "Girlicious" is not fashionable, cute or even worth its weight in syllables.

I bring you entertainment, old-school. 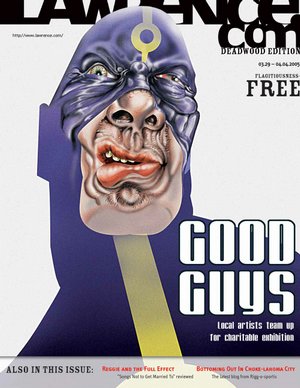