Not seeking to reinvent the wheel, The Prairie Acre delivers solid bluegrass in the Monroe/Stanley lineage.

Bloodshot has just rereleased Scroatbelly's classic 1996 release "Daddy's Farm." Then again, "classic" is a matter of taste, and when it comes to anything related to Split Lip Rayfield, "taste" is a matter of how one feels about murder, incest, domestic abuse, excessive drinking and country music.

From Latin America to Lawrence, local activists shoulder the weight of global struggles

Like salmon that swim upstream to spawn, there must be some innate quality in young boys that causes them to build forts in their back yards out of old boxes. According to "Millions," it's seemingly as common a practice in Britain as it is in America.

Who are we? Why are we here? What is the answer to the great question of life, the universe, and everything? And would a sperm whale suddenly called into existence in midair, miles above an alien planet, want to make friends with the quickly approaching ground?

What Marilynne Robinson has in common with Johnny Cash.

Do you know the way to San Jose? 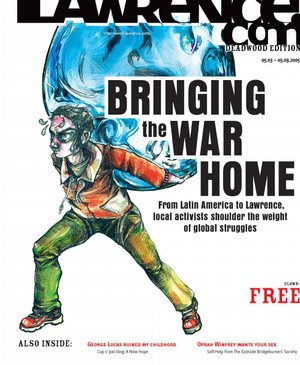