'Star Wars' saga concludes with plunge into dark side

Once considered a bad guy as thematically black as the costume that encases him, Vader has become the dominant figure in the "Star Wars" series. He is its hero; its villain; its centerpiece.

Review :: The Esoteric, "With the Sureness of Sleepwalking"

Even if you wouldn't touch metal with a ten foot pole, you still have to bask in amazement all slack-jawed and yokel-eyed when you see The Esoteric play. Because when these guys are on, they are ON. And come to think of it, they're never really off.

A man of his words

The message is clear, yet hidden. Debatable yet convincing. His 6-foot-4, 290-pound frame only adds to the power in which he tells it. With his mind, his mouth, his emotions and, most of all, his beliefs, Travis Watkins has stayed front-and-center in the spotlight, even though his Kansas University football playing days are done.

May the Force make this movie not suck

Greg Scott has all the markings of a rational fellow. He holds down a steady job as a host at Free State Brewery; he's a black belt in tae kwon do; he talks in complete sentences and uses five-dollar words like "visceral." But now - as the dawn of a new Episode approaches - Scott's rationality has fallen prey to the Dark Side. In its place: a Star Wars Force FX lightsaber.

Kicking and Screaming is hilarious

"Kicking and Screaming" is aimed at kids, but adults will enjoy, too. In fact, much of the film's snarky humor may be lost on most children.

Overall, the ten hours of the story mode prove to be full of four or five memorable moments that are totally worth a once-through, if you have the patience to sit through an otherwise average, but polished, shooter.

Repetitive combat and week-long load times aside, this is an excellent RPG for the casual role-player. While it may lack some of the depth seen in other games of its kind, it is also a much faster paced game. All in all, Jade Empire is one of the last great games for a system whose days are numbered.

This is where you tell me why the media sucks.

A favorite haunt is about to pass away.

Just, you know, to drive you crazy.

One more meme for the week 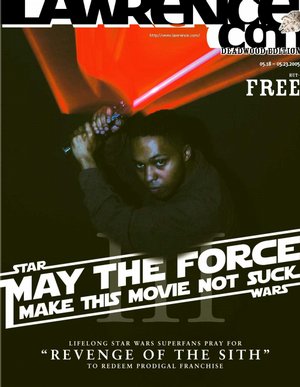