Christine Kosirog had perfected the art of talking herself out of her dreams. The 27-year-old mother of two was on the verge of going back to school for a masters degree in English. A week before classes started, however, she couldn't stop talking about the flower shop she'd always wanted to open.

"The actions of the junior Senator from Wisconsin have caused alarm and dismay amongst our allies abroad and given considerable comfort to our enemies, and whose fault is that? Not really his. He didn't create this situation of fear; he merely exploited it, and rather successfully. Cassius was right: The fault dear Brutus, is not in our stars but in ourselves." When was the last time you heard a news anchor speak that eloquently about a modern issue on a network broadcast?

On Friday, a cast of Lawrence musicians will perform at The Granada to benefit The Lawrence Community Nursery School. Matt Pryor (formerly of The Get Up Kids) will do double-duty, performing an early set with his children's band Terrible Twos and a late set with his grown-up band The New Amsterdams. Lawrence singer/songwriter Julia Peterson will also join the late bill with her seven-piece band The Breaks. Visit lawrence.com to download the entire podcast with Pryor and Peterson and get the latest on both musicians' projects.

Crafting is the cause

A local art group is heavy on D.I.Y. but happens to lack the Y chromosome

Mario Kart DS is a success in every way possible. The online experience is solid, the multiplayer mayhem is as fun as it has ever been and the robust single player modes have enough depth to keep anyone busy for several hours. This is inarguably the no-brainer, must buy, system-selling title that will lead the holiday charge for the Nintendo DS.

I know it's not really the 90s but it's so much more fun to end every statement with "welcome to the 90s dude." The dude part is very important. I've been saying this for a while now whenever the whole 2004 thing comes up in conversation. Nothing will ever be as exciting as it was in the e-nine days. I just pretend "like the deserts miss the rain" is still playing on the radio while I'm reading fantasy novels in my waterbed.

Lawrence to be the new set for Waterworld 2

I looked all around me and there were white caps on the waves. I was floating down 23rd. street. 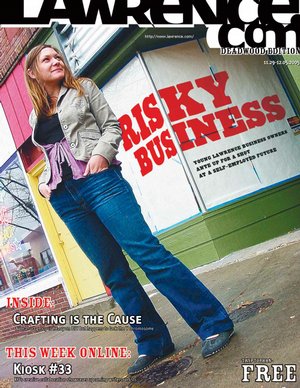