On the first autumn afternoon, a day cool, clear and blue, I listened three times to "What You Came For." It's a good thing there wasn't any whiskey in the house.

Last week, another "alternative" radio station bit the dust. Low ratings signaled the death knell for 97.3FM The Planet, which switched its name to "Max FM" and its format to "Everything That Rocks" (translation: "Everything That Doesn't Rock The Boat").

Tamara Heim has been waiting for sixth months to see the film adaptation of her brother Scott's novel, "Mysterious Skin." The film, which follows two Kansas teens' attempts to overcome the abuse they suffered as children, debuted on the coasts and overseas as early as April. This weekend, "Mysterious Skin" makes the long journey back to the land where it takes place.

30 years of KJHK: A tribute to Steve Greenwood

At the age of 41, Steve Greenwood departed this life. I'm not sure he was ever totally comfortable here. But his life meant a great deal to many people, both those who cared about him and many who never knew him. I guess that's the purpose of this little remembrance; because if you listen to KJHK, you're still listening to Steve's legacy.

1978-80, DJ and news reporter, currently a lawyer living in Austin

I started KU in the fall of 1975, about when KJHK began. I was a long-haired physics and math double-major, and KJHK was playing ubiquitous, ordinary pop.

i used to be one of those kids my freshman year in college who would call up and request music all the time (i was the girl that requested "negative creep" by nirvana over and over again).

I made a number of great friends in Kansas and across the country while working at KJHK who have helped me become who I am today. Anyone out there interested in the entertainment/music industry should get involved with KJHK.

Anyone who has walked into the cozy KJHK studio and taken a little time to explore the station's LP library is already familiar with Blake Gumprecht. Gumprecht's insightful, thorough and artistic album reviews are affixed to many of KJHK's most treasured records. But the reason behind the colorful reviews went beyond visual aesthetics.

The best Spider-man game ever

Ultimate Spider-Man is not only one of the most faithful superhero games ever made, but one of the best in terms of graphics, style and execution.

The commute to the office was supposed to be the easy part. At least that is what I told my friends and co-workers as I was prepping for the challenge of going one week without once starting the car.

More than 50 people are expected back in Lawrence this weekend to celebrate the 100th anniversary of the national Lutheran Campus Ministry.

The National Enquirer reports there have been complaints about a planned Clay Aiken concert at Wichita's largest Protestant congregation.

The Buddhist community in South Korea is now debating the religious overtones in a national scandal involving an art curator who allegedly faked degrees from Kansas University. 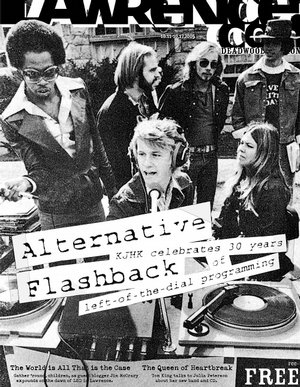