It must be his e-pheromones. That's the only way that Michael Hendrickson can explain his burgeoning fan base on MySpace.com. Without so much as one live performance or one album, the 21-year-old KU junior is consistently among the top-ranked independent artists on the MySpace charts. His alter-ego "Sexy If You're Maladjusted" has about as many profile views (16,000) and "friends" (2,000) as The Appleseed Cast, an established Lawrence band that has toured the world over for nearly a decade.

Richard Gintowt is surely best known to readers of this publication as a writer and reviewer. But outside of the day job, Gintowt is the frontman for reflective rock/country outfit OK Jones.

New York and Kansas don't necessarily have a lot in common. One state is home to the bustling financial and cultural capital of America, while the other is mostly made up of small towns, livestock and open spaces. "The Wild Farewell" is The Harvey Girls' willfully schizophrenic attempt to musically reconcile the two locales.

An interview with Victor Continental

The Victor Continental Show is a singular, irreplaceable part of Lawrence culture. This weekend marks the Lawrence troupe's 12th show since starting in 1998. In some ways, it's typical sketch comedy - everything from ancient history to U.S. politics, from Hollywood to Lawrence is fair game for VC's racy humor and predilection for double entendre.

Of course no one wants to work. But why wouldn't you want to work if you can make money painting a handbag or a public bench?

On eve of new law against racial profiling, Lawrencians share their stories

Cameron Crowe is most effective when his movies are steeped in realism. His Oscar-winning script for "Almost Famous" attained a towering level of truth, partly due to it being based on Crowe's own experiences as a 15-year-old reporter for Rolling Stone in the early 1970s.

Next verse - same as the first

EA has probably produced the best Live installment in the series, but that doesn't mean they've made the best basketball game or even touched the potential the series has. There are still some major kinks that could be addressed.

What an appropriate subtitle

Author to discuss women who 'do too much'

A prolific mystery writer is coming to Lawrence Saturday to discuss her book, "Women Who Do Too Much."

The Kansas senator and presidential hopeful says more and more conservative Christian leaders are committing support to his campaign. 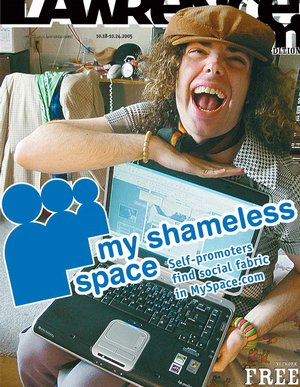