There have been several local hip-hop releases as of late that have reset the bar in a number of ways, that bar becomes irrelevant here; music and message simply push each other to become better

As a Rape Victim/Survivor Service (RVSS) advocate for the GaDuGi SafeCenter, Marita Robinson is often the first point of contact for survivors of sexual assault. Her on-call telephone conversations and 4:00 a.m. trips to the hospital lend a helping hand to victims when they need it most.

'The Aristocrats' Has the Last Laugh

The joke that is the ostensible subject of the obscene and at times hilarious documentary "The Aristocrats" - and whose punch line lends the film its deceptively innocuous title - is not an especially good one. It does, however, provide a marvelous opportunity to take a look inside the psyche of the working comedian, more than 100 examples of whom were persuaded to come before the camera of director/stand-up comic Paul Provenza and his partner in crime, executive producer Penn Jillette, to tell the same dirty gag (and I mean gag) over and over and over.

Given Pound's jaded attitude towards the music industry, it seems remarkable that he signed to a label at all. Remedy Records, however, is a different animal than the faceless conglomerates that Pound speaks so skeptically of. Founded by Neighborhood Studios owner Jerry Johnson, the upstart Lawrence label purports to be the artist-friendly alternative to the faceless corporations.

There are probably very few people in Lawrence who are familiar with The Ants. This is largely due to fact that the band rarely plays around town, which may have something to do with a rotating membership that previously featured out-of-state members. Singer-songwriter Chad Bryan currently resides in Overland Park, however, indicating that we may see The Ants emerge in the near future.

Darkwatch won't revolutionize the genre, but it does many little things so well that it will make enough noise to get noticed, enjoyed and replayed. PS2 owners would be foolish to ignore a solid FPS, and Xbox aficionados tired of Halo 2 or the Tom Clancy shooters would do well to test their trigger mettle with some vampire goodness.

Crazy about the Capitol

What do you think about when you think Kansas? The Legislature? Me neither.

Sorry for the cheesy Beatles' reference. But it's time to move onto the No. 9 in the list of Top 10 things you decided were lovable about Lawrence.

I'm always at the back of the pack. Except you really couldn't properly say I'm even part of the pack ... more a lagger, a straggler, not connected in any real way to the rest of the runners except by way of sharing a track with them. 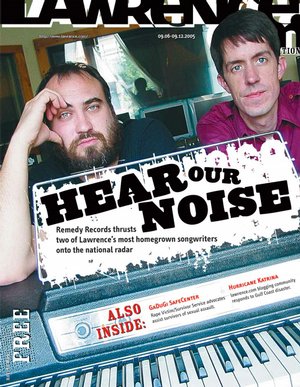