Review :: The Billions, "Trash or Treasure"

After four full-length albums and extensive touring, The Billions have developed an audience of hundreds (maybe thousands?) of listeners who appreciate the band's unaffected approach to crafting distinctive pop/rock songs. Too often overlooked in their own backyard, the Lawrence band adds another chapter to their fine string of releases with the topflight "Trash or Treasure."

Kim Hewett always hated math. Until, that is, she started teaching it.

Jim McCrary was miserable. It was 1965. War protests and civil rights marches raged across the country. Artists were reacting to the turmoil with radical words and pictures.

"There are over 550 million firearms in worldwide circulation," Nicolas Cage's character explains in the film's opening narration. "That's one firearm for every 12 people on the planet. The only question is: How do we arm the other 11?"

This is a test of the Emergency Target Marketing system

THQ couldn't be more obvious with their target audience for Big Mutha Truckers 2. It's only $19.99, and filled with tons of (attempted) lowbrow humor and digital breasts to appeal to the lowest-common denominator gamer. This game is clearly neither for anyone who knows anything about games nor anyone who would actually be reading a videogame review on a website.

Wherein you, gentle reader, get to extend the mythology of the blog. But only if you are very, very clever.

Many great things about living in Lawrence. And one not-so-much.

Warning. I get sappy, vulnerable and mushy inside. Plus, more reasons for the Top 500 list. 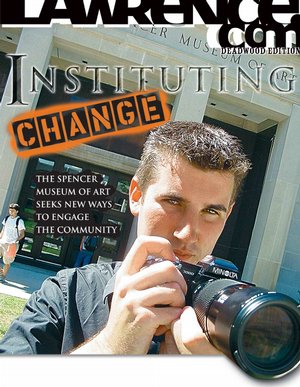