David Rees clearly has a lot on his mind. The 30-something artist's comics are just a few frames, but they pack a manifesto's worth of punch in sarcastic criticism and biting wit ...

Pain is good. Pain lets you know you're alive. Erik Riley reminds his pupils of this as they huff their way through suicide drills in the Haskell Boxing Club's heat and mosquito-afflicted practice space. The makeshift gym is the size of two living rooms - barely large enough to contain the 10 amateur fighters in attendance for a Monday-evening workout.

Meghan Dervin is hyped about volunteering at The Habitat ReStore.

Downtown after the game

I'm too mature to go nuts when the Jayhawks get into the Final Four. Aren't I? Plus, where should ESPN.com look in Lawrence?

Pardon me while I get sentimental and gushy for a second. The first few days of spring are the best part of the year.

Remember the 80s? The Cold War? The New Wave? And Lawrence? 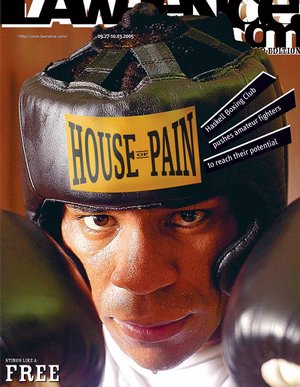