Imagine sitting though a domestic-violence court case and approaching the victim at its conclusion. You hand her a business card. She looks at you and cries.

State of the Arts Center

Can this building be all things to all Lawrence artists?

Last Friday, the Lawrence Arts Center opened its doors to 70 local artists and 92 works of local art. The Lawrence Art Guild's annual all-member show is the first of more than a dozen LAC shows this year that will showcase Lawrence artists. Last year, the center displayed the works of more than 1,000 locals.

'Hoodwinked' not Pixar, but not criminal either

In the high-stakes big budget world of computer animation, "Hoodwinked" is an anomaly, as it was made without the benefit of major studio cash. Audiences have become accustomed to the dazzling visuals of Pixar movies, however, so the makers of this independently financed movie face an uphill battle, especially since its characters are all uncomfortably glassy-eyed and move like two-jointed 80s action figures.

Did your pick get Game of the Year?

Games receive five points for a first place vote, three for a second place vote and one for a third place vote. Since there were ten gamers on the panel, one game could score a maximum of 50 nomination points if it received all first place votes in a category. Without further ado, here are your Lawrence.com 2005 Gamer's Voice Award winners...

Stick It Under A Bushel, Already.

I'd like to see a new Constitutional ammendment, myself: Thou shalt keep your beliefs to yourself. 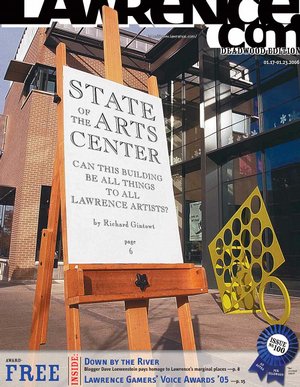