If you are gay and in the military, what do you do? Tell people? Hide it? And what happens? Three distinct stories-one of an openly lesbian sailor, one of a gay soldier who was discreet until he'd had enough, and one of a soldier was murdered because he was thought to be gay-paint a picture of the "don't ask, don't tell" policy and its effect on gays in the military.

From her beginnings as a KJHK DJ to her current status as one of the Midwest's foremost concert promoters, Jacki Becker embodies the DIY ethos: work hard, make friends and have fun.

Our great state beseeches your help in creating its future antiquity

Egypt may have their hoity-toity triangular coffins, but Gove County has the Chalk Pyramids. Babylon might think they're all that and a bag of ziggurats because they had a few ferns on the roof, but the town of Lucas has the Garden of Eden.

'Lookout' for this little gem of a crime film

A small town in rural Kansas City is not the most obvious place to set a heist picture starring Joseph Gordon-Levitt and Isla Fisher, two of Hollywood's brightest up-and-coming stars. And centering your movie on a brain-damaged bank janitor is about as far away as you can get from glitz and glamour, but that is one of the reasons "The Lookout" is such a refreshing treat.

I'm a white guy from Kansas, but I think I'm smart enough to realize that Def Jam Icon resembles "street life" about as much as God of War resembles the US Marine experience.

Whether you're talking about twelve bars or nine innings, Chicago is going to be a very sad place for a while. 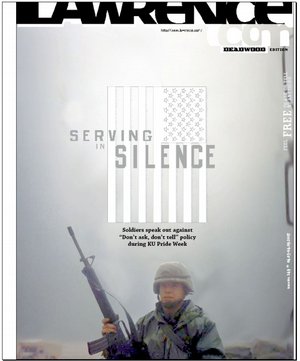