The more you know:

When heading out to the Wakarusa Music & Camping Festival this June, it might be a good idea to pack more than your sunscreen, shades and usual camping gear.

When I saw the pitch-perfect zombie movie homage "Shaun of the Dead," I figured the reason there was so much gore was pretty obvious. It's a zombie movie. Duh.

A Kansas marine talks about the war while home from Iraq

In 1999, a marine recruiter visited Seaman High School in Topeka. That was before 9/11, before most Americans had ever heard the name Osama bin Laden or thought much about terrorism. The recruiter found Jeff Hodges ready to sign up-his plan was to get a chemical engineering degree at KU and become a military officer.

TOWNIE GUIDE TO: Being a Cool Parent (or babysitter)

COD2 featured in-game lag, and COD3 took forever to get into a match. Luckily, the online issues have almost entirely been fixed, and it results in one of the greatest multiplayer experiences on the system.

Test the limits of your political acumen...and sanity.

Breaking last week's news all over your face! 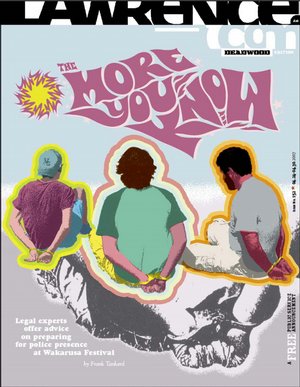